What? Yes, you read that right. We live in a killing field. Well, more like, “I don’t care about anyone but me” field.

I have been infected with the modern day plague. The flu. THE FLU. You know, that virus that is killing otherwise perfectly healthy people. That flu.

I was at Wally World grocery shopping when I hear it…then I feel it. *Cough* *Cough* splat. Someone coughed in my general direction and I felt the disgusting mist hit my neck. Gross…but, it gets worse. *A…aaa…choo!* My hair moved. Like, a gust of wind kicked up and moved through my hair. It made my skin crawl.

Standing a few feet away from me is a kid wiping his nose on the back of his hand as he roots through the bananas. This walking, talking petri dish is groping the bananas. Just a few feet from him are 2 adults, one male, and one female. I soon find out that these are his parents. That’s right…both of these adults are his parents. Clearly, this young man, 12-ish, is sick. Between coughing, sneezing and snotting all over the produce, he whines to his parents about how bad he feels.

Yes, he TOLD them he felt bad. But, what to the parents of the year do…? They continue to shop. Up and down aisles, in and out of different departments, all while dragging this kid along behind them. He continues to gag, sneeze and TOUCH everything within reach.

Welcome to the killing field. The last few weeks I have watched the news and listened to the death count of children rise who contracted the flu. Healthy people are dying from this virus, but you, mom and dad of the year, don’t give a flying rats ass! One of you could have stayed home with your son while the other went shopping. One of you could have kept your boy in a warm, comfortable climate while his body tried to fight off the illness that he was dragging through the store. No- why would you do that?

It’s called common courtesy.  It’s called respect for others. Their lack of caring has had an effect on my household. I am now, sick. Pounding headache, itchy ears, runny nose, sore throat, tired…my hair hurts! So, thank you, mom and dad, for not giving a shit about others. Thank you for teaching your son that the health and well-being of the general population are not important in comparison to you getting a bag of Doritos.

I am a fairly strong individual and do not anticipate this illness having any long-lasting effect on me, but I wasn’t the only person in the store that day. There were other children and the elderly. There were people that would suffer greatly if they contracted this plague.

Stop for a moment and think- “Would I want little Timmy to infect his grandma with this illness?” If the answer is no then don’t infect the rest of us. If, however, the answer is yes- seek help.

Time for more Benadryl and a nap. Blah 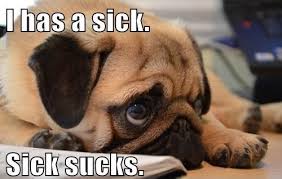 It’s All About Being Prepared

It’s All in the Mind…Set