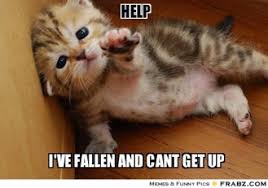 …you dislocate your knee going to the bathroom.

So, yea, that happened over the weekend. I know it wasn’t the hurdle of going to the bathroom that did me in. It was the attitude earlier in the day at the gym when I puffed up my chest and said, “Pish, I can do better than that.” IDIOT.

As I have mentioned in the past- I’m a gym Unicorn. NOT a rat. I sparkle. Get it right, people. Well, it is now the dreaded time of year when the gyms are overrun with RESOLUTION-ers  who have no clue how to use equipment and wander around confused while staring at their phones. BUT, there are those that think they know everything and the Hulk could take some pointers from them. Leave it to this 47 year old to attempt to school said blow-hards.

I continued on for nearly an hour before I blotted the sparkle on my forehead and made my way back home. While in the bathroom prepping for a much needed shower- cuz apparently sparkling stinks- I turned to the left and my knee went right. Not good. Nope.

So now I am in a knee brace and avoiding the walk of shame in the gym…but I schooled that punk! Never underestimate a person who has the goal to prove everyone wrong.

I am off to get a new ice pack and a few ibuprofen. Pray for your favorite Beastie-