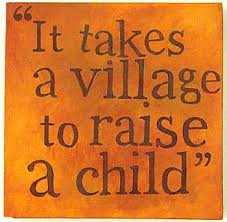 According to this quote that I hear all the time…it takes an entire community to raise a well-balanced child. Cool…but…why do we have such an issue with step-parents?

The evil stepmother was created in fairytales, but we do not live in fairytales. We live in the real world where relationship fracture and end and another begins. Yet we belittle and attack the stepparent. Why? Don’t we, as parents want as many people in our children’s lives who will love and care for them? That is what a stepparent does. They voluntarily take on the responsibility of your child. They DO NOT replace the parent, they assist in the journey.

No, I am not a stepparent. I am a parent who loves a stepparent, and I didn’t make it easy on him. You see, not only did I have a failed relationship but I also grew up in a home without a father/father figure in it. I was taught that if the grass needs to be mowed or the trash taken out then I should do it. I was raised by a hardcore woman who saw no use for men other than to bash them.  It also taught me to be very independent and capable all on my own, so the Hubs had his hands full in the beginning.

I questioned and doubted. I pointed fingers and set limits. I was stupid and WRONG. That’s right guys, a woman just admitted she was wrong.  You may want to print this out as proof. I pushed all of my misconceptions on him. I even did the, “Don’t you yell at my child! You aren’t her father!” (Sorry about that, babe. I was stupid.)

He wasn’t trying to take the place of her father. He was trying to be my partner. He wanted to be there for me and to help me in any way he could. The problem was, I wasn’t letting him. I read those fairytales as a kid. I know how horrible stepparents are. They want to poison apples and lock children in towers and…No, they don’t. They want to love you and your child and be included in your family. That is all a good stepparent wants.

The Hubs never wanted to take the place of her father. He just wanted to be included and heard when it came to the wellbeing of our daughter. He wanted to be a part of the village that was needed to raise a child. The first major problem was…wait for it…me. I was the first hurdle that needed to be jumped. Until I was in the mindset that the Hubs was a good influence on my life and her’s I would always stand in his way. That poor man tried and tried for over a year to prove himself and I slammed the door every time. It took him walking out of our apartment completely defeated and angry for me to see where I was WRONG. (There it is again guys!) I was so wrong.

I sat in our living room with my daughter wondering if I could or wanted to fix the problem when she asked where he went. She wanted to know why he was sad and why he went bye-bye. SHE needed him. She wanted him. She wanted to make him happy cuz sad sucks. I was stupid. So I gathered up the little monkey and went in search of the Hubs. I confessed my stupidity. Declared I was wrong- yes, he was shocked and begged him to help me understand the role of not only a stepparent but of a father as well.

It was a rough adjustment period for all of us. I had to learn to give him my trust in an area I knew nothing about. I did not have a father. I did not have a strong male figure in my life until I was well into my teen years and by then the damage had been done. I can’t even begin to understand what the Hubs was going through (Maybe, if we are nice he will do a guest blog and tell us…).All I know is I loved him then and love him today. Our devotion to one another is what brought us through such a bumpy road.

A note to parents: Things happen and relationship crumble- but your crap should NEVER fall on the child. I had issues excepting a man’s place in a home because my father walked and never bothered to come around. Yes, my mother was a piece of work that would scare a troop of Navy Seals, but that’s not my fault. I was a child that needed BOTH parents. I needed to see the world from both views. I battled to open my heart and trust a man because men had screwed me over since birth. My poor husband had to shoulder the blame and attempt to fix things he never did. He shouldn’t have had to fix the damage done by others.

If you are living separate lives and your ex has moved on to a new relationship- let it be. As long as the new partner is a good person with pure intentions toward your child- let it be. Showing your child that love and respect are possible and that people CAN get along is a truly wonderful lesson they can learn. Will it be easy? Probably not. We all harbor bad feelings for those that have hurt us but you need to set that aside for the children. Letting them be loved by your family, your ex’s family AND a stepparents family is a good thing. Keep in mind that there will come a day when you all will have to sit together in a room for your child- graduation, marriage, special events- and the last thing you want to do is ruin it by being hateful and cruel. Remember, your child shares half of their DNA from your ex and every time you bash your ex you are telling your child that half of what makes them is bad.

It was so easy to believe fairy tales about cruel and horrible stepparents when we were kids- so let’s be as open to seeing the possibility of love and happiness when people come together to create a family. It won’t always be the Brady Bunch…but who knows.